The History of the Forrest Theatre 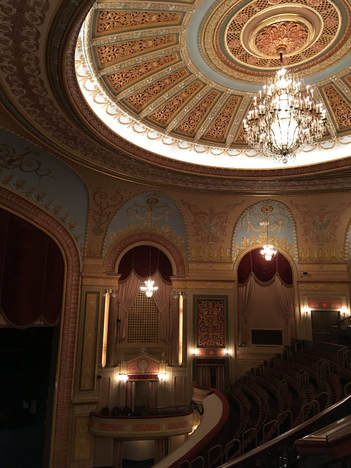 The Forrest is a quintessential "road house," stripped to the bare walls and used primarily by touring theatre and dance companies. It is owned by the Shubert Organization, a company that was started by three brothers from Syracuse, NY about 100 years ago.

The Shubert brothers were Sam, Lee and J.J. Shubert. Sam, the leader, who died tragically in a train crash in 1905, was charming and gregarious, while eldest brother Lee was aloof (dubbed "The Wooden Indian") and the youngest, Jacob J. ( J.J.) was mercurial. Their personalities were an important factor in the way they conducted business, including the construction of their playhouses.

In 1903 the Shuberts began what became a long running battle with their arch rivals "The Theatrical Syndicate" for the opportunity to present dramatic and musical shows across the country. The Syndicate viewed the Shuberts entry into "their" market as unwanted competition and did everything they could to block them. The Shuberts realized that owning their own real estate was fundamental to their long term survival, and by 1908, the Shuberts began actively building playhouses.

1927 was the year that many considered the Shuberts' "peak year". They dominated the first class legitimate theatrical business, controlling 43 theatres in New York, 61 on the road and booking over 1000 more. Their share represented 60% of the legit business in the country, and some accused them of engaging the same unsavory business practices has been used by their former enemy, the Syndicate.

Herbert J. Krapp, the architect of the Forrest, began his association with the Shuberts in 1912, eventually becoming their "house architect". He replaced Chicago architect Benjamin H. Marshall who made the mistake of running over budget for a previous project, the Maxine Elliott Theatre in New York, by the "appalling" sum of $20,000.

Krapp had a long relationship with the Shubert brothers, in large part, because of his resourcefulness. He created theaters out of existing buildings and designed playhouses to fit (and work) in small plots of land. Always budget conscious, Krapp theatre exteriors had few frills. He spent the majority of his budget on creating beautiful interiors.

After 1925, however, he paid more attention to exterior treatments and audience amenities. The New Forrest was "one of Krapp's most elaborate playhouse designs as well as his last."

Prior to 1927, the Shuberts and rival A.L. Erlanger agreed not to engage in mutually destructive booking tactics. They had managed jointly the original Forrest Theatre on Broad and Sansom Streets, where the Fidelity Bank building now stands. But, after Fidelity decided to demolish the old Forrest, Erlanger joined forces with the Stanley Theatre Co. of Philadelphia to build a new playhouse at Market and 21st Streets from which the Shuberts would be excluded. The Shuberts retaliated by purchasing the site at 1114 Walnut Street, vowing to surpass Erlanger's new theatre in terms of size and splendor.

Ground was broken for the "New" Forrest Theatre September 1st, 1927. Named after Edwin Forrest, the great Philadelphia born tragic actor of the nineteenth century, it was built at a cost of over $2,000,000. Construction was completed in time for a May 1st, 1928 opening. The new venue boasted many modern conveniences including wider seats in the orchestra, a smoking room for both men and ladies in the lower lounge and state of the art ventilating and electrical systems. The opening performance was The Red Robe, starring Walter Woolf and Evelyn Herbert.

Krapp also designed and supervised the building of the Shubert Theatre (currently The Merriam), 260 S. Broad St., next to the Academy of Music in 1918.

After 1928, Krapp's architectural commissions waned because of the glut of Broadway theatres and the ensuing depression. However, a new career as inventor of commercial and industrial coupling devices proved more profitable than this theatrical work. (He invented a garden hose attachment that was subsequently adopted by the US Air Force for inflight fueling of their bombers.)

Many musicals, dramas and comedies have been launched from the Forrest Theatre. Yiddish Theatre, one man shows, dance programs, Gilbert & Sullivan productions and the Philadelphia Orchestra have all graced this stage.

In 2017, an extensive redecoration to the Auditorium and Mezzanine Lounge was completed as well as improvements to the air conditioning and heating systems. An earlier renovation in 1997 included barrier removals and accessibly improvements including the addition of a handicapped accessible bathroom. The Grand Foyer was redone in the early 1990's by famous theatrical scenic designer Oliver Smith.
Photography by Whitney Cox
Courtesy of Shubert Archives